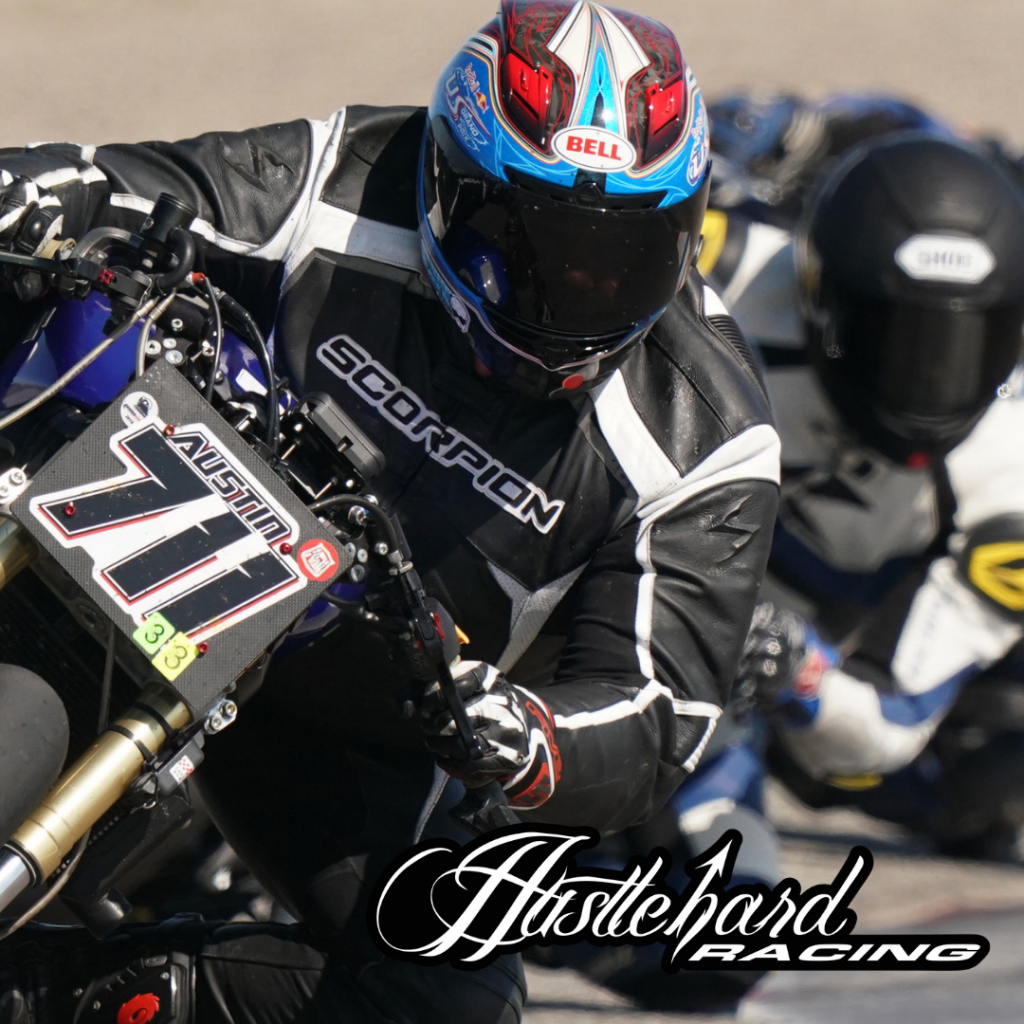 The 2019 team is made up by a number of riders, with us at Buttonwillow we had our man, Canadian Chad Swain, aka Spooner, aka #swaintrain aka Chadwick on the HHR Performance BMW S1000RR SBK. Clad in gorgeous Carbonin bodywork and adorned with Swain's number #99 she looks every bit as good as she goes, at least until it gets chucked down the road! Daniel Velazco, AKA DNF, is also back for 2019 on his #986 S1000RR, looking to come back from a rough 2018 which saw him injured badly at Buttonwillow Round 1. Hopefully, DNF can have a safe consistent 2019. Joining the team this year is Shane Austin, Shane is also from Canada and will be campaigning an SV650 wearing number 711. Shane is also currently writing in the third person, so lets put a stop to that right now. I=Shane Austin, AKA Stonecold, AKA Austin, AKA Shaneo.

The team also had a pair of Kawis in the pits this weekend with Liam Sutherland making his AFM Novice debut on his #805 ZX6R. No AKA's for him just yet, but that will come naturally. The other Kawasaki was honorary team member Dustin Walbon. Walbon will be contesting the MotoAmerica Twins Cup this year and was at RD 1 in order to get his eye in for the season opener in two weeks at Road Atlanta. Last but not least, Chris Farros is with the team on his BMW S1000RR competing in multiple classes with the yellow #984 on the front. No AKA for him either, but if I have to force one into the round two report, you know I will.

Everyone would be facing an uphill battle this weekend as the paddock was full of national-level talent. The Hustle Hard Racing Formula Pacific class was riddled with top-end names. Carbonin sponsored teams such as Graves Motorsport, and Omega Moto were present with their respective Kawasaki and Yamaha superbikes, as well as Carbonin/HHR supported rider Jayson Uribe on his now, somewhat factory-backed, Honda.

Chad Swain was not able to make it to Friday practice and would have to come from behind on Saturday and get up to speed. He did just that, clocking a 1:50.695. Chad was a touch disappointed with the pace, but having come into Saturday with no seat time on the bike since Thunderhill last year, the team was pleased with the progress. A few adjustments made to the bike would hopefully improve things for Sunday.

The team's first races were to take place on Saturday, Sutherland on the ZX6R would be competing in the Clubman MWT class, and Farros would be on his BMW in the Clubman Heavyweight class. Both lads went out and turned solid laps, Farros cracked the 2:01's and Sutherland crossed the finish line having broken through to a best lap of 2:06.2 No crashes on Friday or Saturday meant we could have the night off, and the team took full advantage.
Devin Husband had been out all day practicing for his race. Team principle Mark had so graciously bought him a Honda CRF 150, and Devin was taking full advantage of the new weapon. Husband was hell-bent on bringing home the cock. For the uninitiated amongst us, AFM Saturday night is punctuated by the slow bike races, and the winner gets to take home a giant inflatable cock. The thought of open tryouts had spread throughout the HHR pit, but eventually, Austin capitulated that Husband was the man for the gig. DH just went and did it. Winning the singles, two up, and three up race. There was one moment of concern when Devin smashed his CRF into the unsuspecting leg of none other than Chad Swain. One would assume Devin would have known better than to fold up the leg of our star rider...but alas, the red mist got the best of him and the night nearly ended in tears. Thank god Chad was, shall we say, "relaxed" at the time of the incident. I can only assume that Devin is enjoying his cock, and can't wait to defend it at round 2.

Sunday morning, conditions were perfect, just like the other two days. Laps were going to get smashed. The day was pretty well non stop for HHR, with riders headed out in almost every race.

Open Superbike would be our first contest. The battle at the front would be contested by some of the best riders in the nation. Carbonin supported rider Cam Petersen went out and set a new track record, a 1:43.497. Stupid. Fellow Carbonin rider Jayson Uribe tried his best, but could only manage a 1:44.4 finishing second. AFM #1 plate holder Andrew Lee, also rocking Carbonin bodywork, finished fourth just behind David Anthony. Our boy Chad crossed the line in seventh. The highest finishing rider not competing in Motoamerica this year. Chad seemed a tad frustrated after this one, but he turned his fastest laps of the weekend to that point, with no bike time, everyone looking at the situation objectively knew he had performed well and ridden hard on the #99 BMW. Velazco and Farros also contested this one, both going faster than they had on Sunday. Daniel Velazco did a 1:56.5 and Chris turned a 2:00, so so close to cracking into the 1's.

Next up was myself, Shane Austin. I knew I was in tough with my naked, stock SV, but I was focused. A poor start really hurt my chances and a coming together over Phil Hill with another rider completely finished me off. But, I turned quicker and quicker laps all race, with my fastest being the final lap, a 2:03.6, lots left there for my next two, I was happy with my progress.

Dustin Walbon was out next in 600 SBK, yet another class dominated by MotoAmerica boys. Bryce Prince and Braeden Ortt put on a show out front while Walbon finished an impressive seventh.

Velazco and Farros both went out in Open GP. Farros was able to crack below 2:00! Running a 1:59.4 on his fourth lap. Carbonin rider Jayson Uribe took an impressive win after Petersen was unable to finish. Velazco turned consistent times and brought the bike home in one piece, ready for the weekend's feature race, Formula Pacific.

I was back out in MWT twins on my 711 SV, the race was relatively uneventful, read boring, but yet again I progressed throughout the race to click off my fastest time on the final lap. This one was a 2:02, closer to my weekend goal of sub 2. Young gun Rocco Landers, and old man Dave Moss both pulled me around at times, which obviously helped. There is no better way to learn than to go out there and get a tow, and I had full trust that those two knew where to put their machines.

I came in and helped Dustin get out for the feature 600 race, Formula 1. I could tell only by his body language that this boy was going to pull the fucking pin and put on a show. I was confident he would either bring it home on the box, or in a box. He did not disappoint, clicking off 1:50's and fighting for the final podium spot with Robert Pierce. Long story short, and I do mean very very short Dustin's ZX6 crossed the line 1 1/100th of a second behind Pierce. I can't be sure how much distance on the track that actually is, but less than your foreskin ...if you still have it. Walbon was gutted not to bring home a piece of plastic, but the performance was impressive.

Let's skip ahead now, I went out in Formula IV and went marginally quicker, but who cares. Its time for Hustle Hard Racing Formula Pacific. From the second the flag dropped, for the first time, the boys were not messing about, Brit Bradley Ward got a stupid start and came through the pack, only to bash two riders into turn one, everyone stayed upright, but Wards boss Dave Anthony was the real loser, running off into the dirt and losing a ton of time. I am no expert, but smashing your new boss off the track cannot help your standing in the team! Luckily its a two-man show over there, so it is impossible for Bradley to receive a demotion. In the end, it did not matter as the race would be red flagged. The lads got informed there would be a full restart.

Off the restart, it was the same old story, Carbonin boys Lee, Uribe, and Petersen mixing it up with Prince and Anthony. Chad would be working to win the unofficial title of "best of the rest" a rather worthless accomplishment, but aren't they all. Again he went quicker, bringing his laps down to 1:47 — less than a second off Bradley Ward who has been competing all winter in CVMA. The ninth-place might not look great on the sheet, but when you take away the full-time Motoamerica riders, its a podium finish. Daniel Velazco was unable to complete the race, pulling off on lap seven of fifteen.

The rest of the weekend would pass by without incident, and all of us ended the weekend without crashing, well Dustin and I both hit people, but we didn't go down so that counts as not crashing right?
Round 2 is back at Buttonwillow in less than three weeks, with the Motoamerica lads at COTA the goal will be to bring home some plastic, and run faster than we did this time out.