This Past weekend at Pittsburg International Raceway seen some amazing racing across all classes in Moto America. The weekend started off with Jake Gagne setting the pace right from the get go and that continued through the weekend. 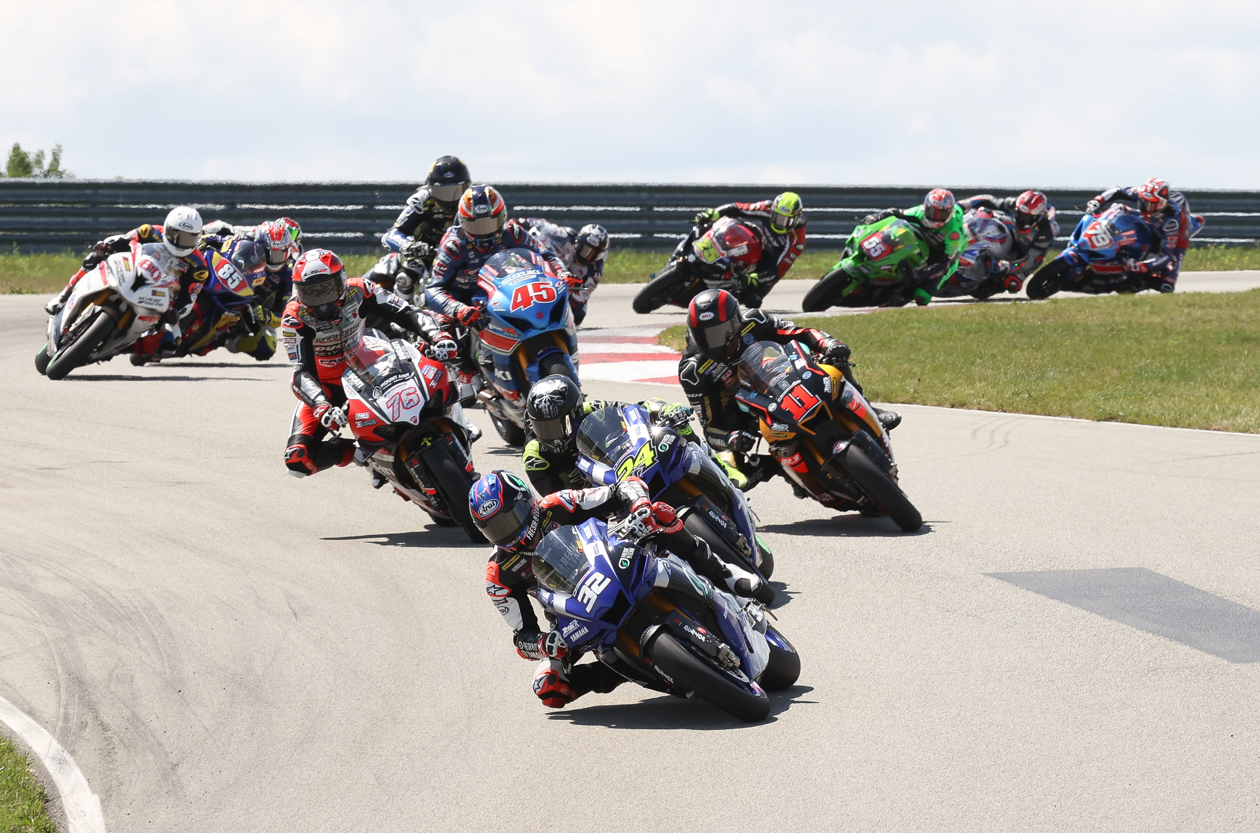 What was a surprise was how the weekend went for French Man Loris Baz on the Warhorse HSBK Racing Ducati New York. Baz was third fastest in practice and qualifying securing the last spot on the front row. In Race 1 Baz was battling to hold that 3rd spot on lap 1 and had some contact with Westby Racings Mathew Scholtz pushing Matt wide and nearly off the track, This let Cameron Peterson take the third spot so Baz had work to do to get back to his original starting position. Meanwhile Jake Gagne was putting down the hammer and distance between himself and Baz. Stand in rider Toni Elias was in hot pursuit of his team mate Jake Gagne and looking comfortable on the Fresh N' Lean Attack Performance Yamaha R1. Baz crashed out on Lap 3 ending his chance of any victory so the last podium spot fight was up for grabs between fellow countrymen Matthew Scholtz and Cameron Peterson, Matthew managed to make the pass and put his head down and reel in Toni Elias make the pass for second and continues to stay 2nd in the championship. While HHR Sponsored Kyle Wyman was back in action after breaking his Elbow in Road America at round 3 he looked good out there on his Kyle Wyman Racing Panera Bread Ducati V4R, Kyle was battling with Hector Barbera on the Shiebe Racing BMW S1000rr and managing a 6th place finish while still fighting to be 100% fit. His Brother Travis Wyman was in a heated 5 rider battle in the Superbike Cup and avoided a high speed get off when he caught air coming up over the crest in turn 2 which lost him multiple positions and resulted in a torn calf muscle, Travis was able to ride out the bucking bronco and stay in the race bringing it home in 14th overall. 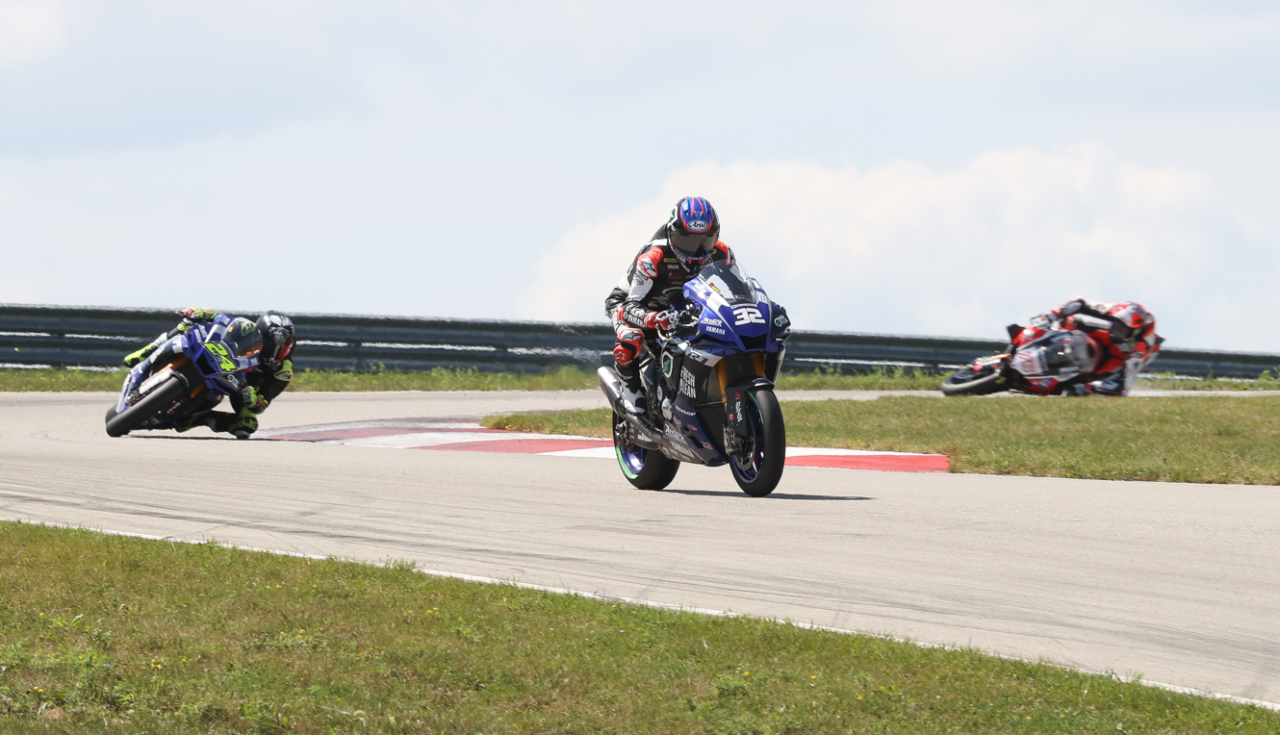 Superbike race 2 grids up from the previous race results so Race 2 on Sunday saw Jake Gage in the number 1 spot with Matthew Scholtz and Toni Elias up front , Loriz Baz started 11th on the grid so had work to do. Kyle Wyman starts from row 2.

Gagne Got the holeshot and  Toni Elias tucked in behind him with Matthew Scholtz , Bobby Fong and Cam Peterson, Kyle Wyman, Loris Baz and Hector Barbera all in a freight train in Tow. Matthew stalked Tony for several laps before putting a move on him on lap 5 before Jake managed to get too far ahead. Fong managed to close in on Toni  but Loris Baz was not able to hang with the Fonger as Bobby managed to hunt down Toni Elias and get himself a 3rd spot on the podium. Baz couldnt catch Toni so brought it home in 5th Kyle Wyman and Hector Barbera were going at it for 7th place putting on a show but Barbera managed to get Kyle on the run to the line.

In Stock1000 on Sunday we seen our Sponsored rider Travis Wyman on the Podium which was pretty incredible considering the torn calf he sustained from the previous days high speed dance with his BMW.

Travis tucked into 2nd spot in the race charging hard to catch Jake Lewis who was setting the pace and was able to break away from the rest of the pack bringing home a podium spot in 2nd place.

“I was confident coming into this weekend that we could get back on top of the box here at Pitt Race. Qualifying went great, as we qualified second for the Stock 1000 race. I was looking forward to the first Superbike race, but I had a big moment that set me back a bit. I tore my left calf muscle in the incident, and I woke up Sunday morning not sure if I’d be able to race. I got help from the doctors here and my riding coach, but I knew it was going to be difficult to get through the day. I battled in the Sunday Superbike race to get a pretty good finish – third among the Cup riders. In the Stock 1000 race, I knew if I got a good start and pushed hard early I could break away with the polesitter and battle with him until the end of the race. I just couldn’t push in the last handful of laps due to arm pump and my calf injury. I’m not super happy with second place, but it was great to bring home another podium for the team.” 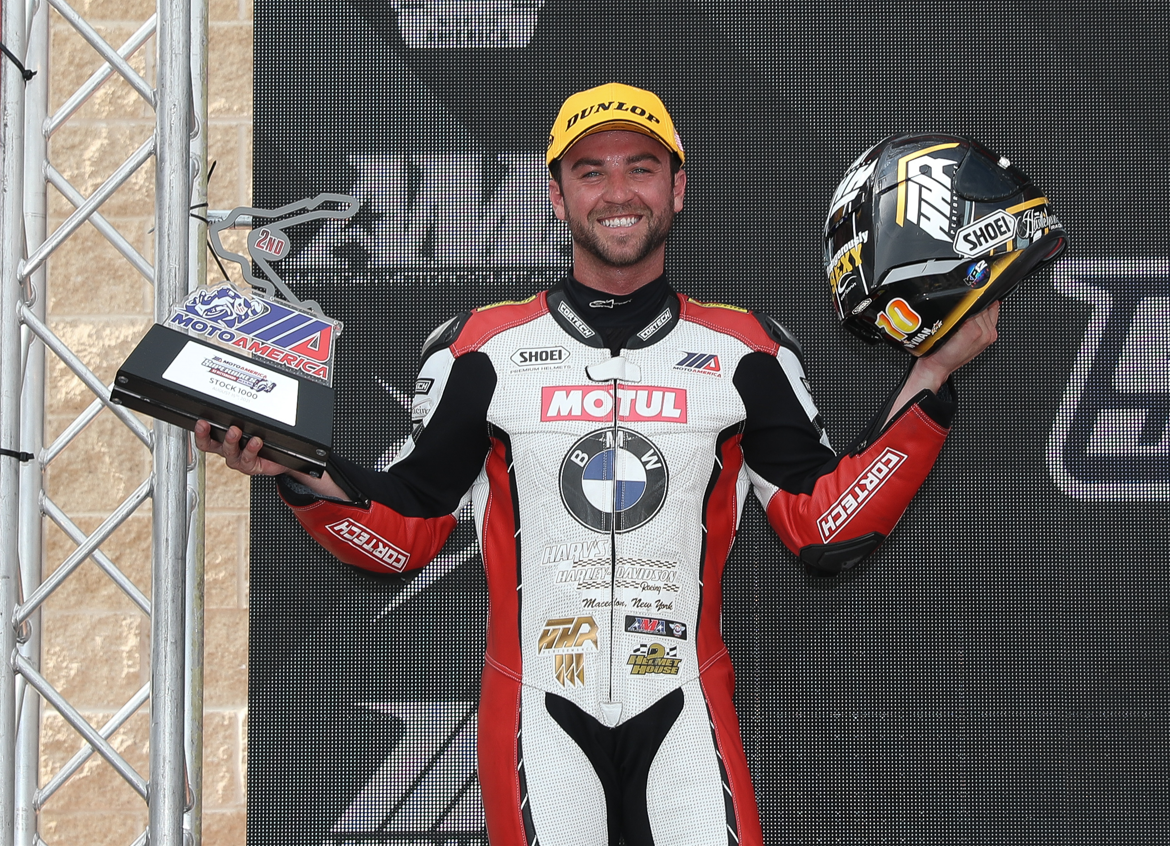 Supersport 600 gave us some amazing racing with the top guys going at it all weekend long.#1 Plate holder Richie Escalante and Sean Dylan Kelly were going at it up front and not too far back we saw Sam Lochoff battle with Benjamin Smith and Stefano Mesa and Rocco Landers. HHR riders Smith and Mesa have been battling each other all season and now Rocco is starting to put it together and stay consistent. In race 1 we seen Richie take the win followed by Sean Dylan Kelly and Rocco Landers finish out the podium and what a race it was. We thought Smith was going to put the Northeast cycle outlet on the podium until a last lap move by Rocco Landers

Race 2 saw Escalante  SDK and Smith break away early, SDK made a move on Escalante early and made it stick, Lochoff Landers and Mesa were strung out a little more but had a big gap behind them. It looked like the podium battle was between SDK Escalante and Smith until lap 9 where we saw Smith drop off the back of the front 2, this gave Lochoff a carrot and put the charge on to try and hunt down Smith, he was able to put the move on Smith on lap 11 then Rocco Landers took the bait and passed Smith. Escalante made the move to regain 1st with 5 laps to go but the real surprise came from Rocco Landers who managed to pass Smith and close the gap on Lochoff with 3 laps to go and made the move on Lochoff to secure his 3rd step on the Podium. SDK took the win and Escalante finished 2nd. HHR Riders Smith and Mesa finished the race 5th and 6th. 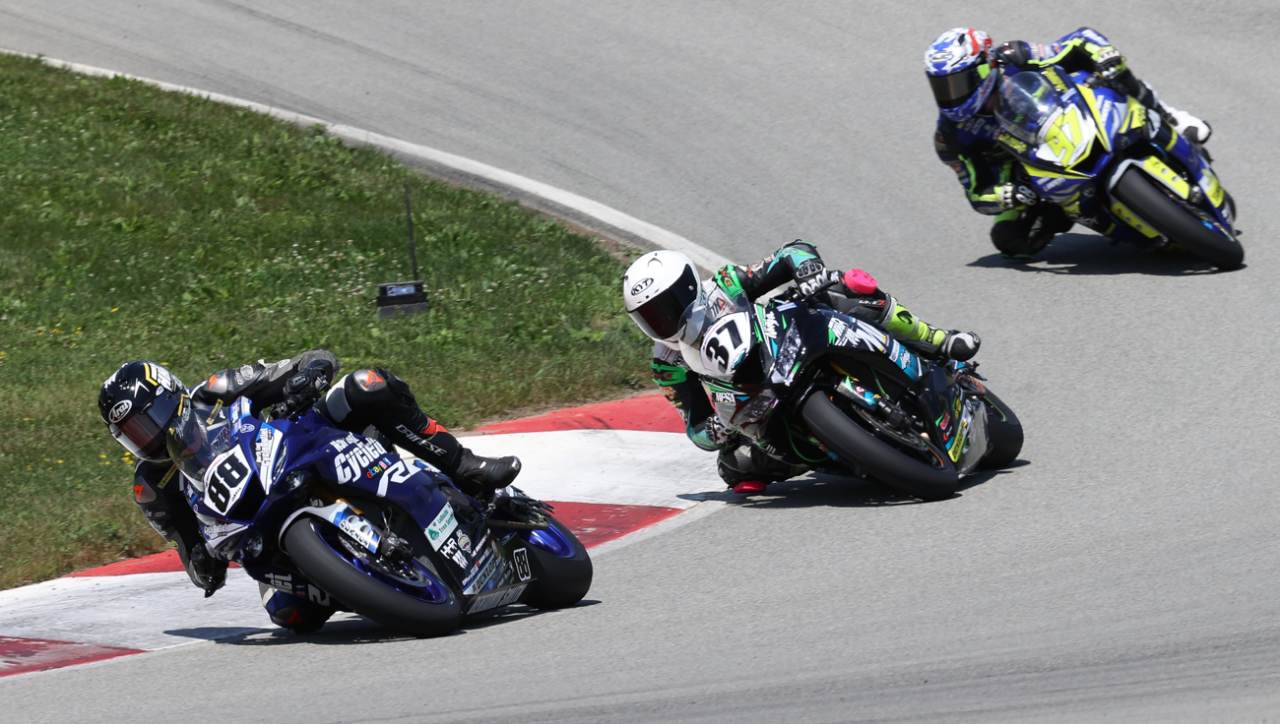 We now look forward to a small break and time to heal up and come back strong for the next race round of the series which is in New Jersey!