Smiths Fly Over the Mountain At Cadewll 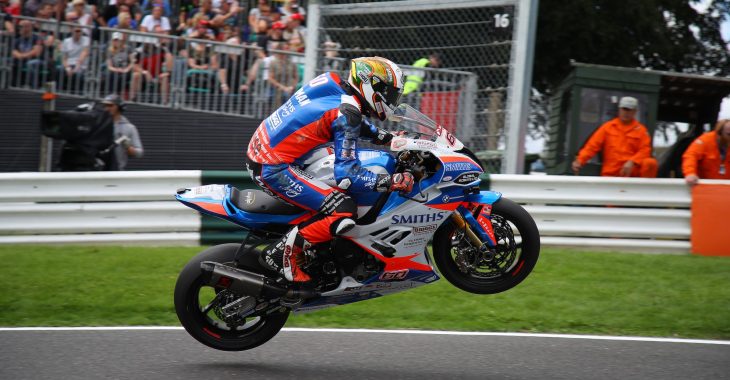 Competing at his home circuit which was hosting round eight of the series, Lincoln-based Hickman was eager to put himself into the top six and subsequently into one of the all-important Showdown positions but two spills in practice on the Smiths BMW S1000RR, when he hit a false neutral on both occasions, put him on the back foot and he ended up on row four of the grid for race one.

In front of another massive Cadwell Park crowd, Hicky made a good start which saw him immediately gain two places and he remained in eighth place until lap five when he moved up to seventh. Two laps later he was up to sixth and his cause was aided further when Christian Iddon, with whom he was dicing, ran off track meaning Hickman moved up to fifth at the chequered flag. His good pace allowed him to start the second race from the second row with the 32-year old completing the opening lap in fourth place. A lap later he dropped back a place as fellow BMW rider Iddon moved ahead of him exiting Park Corner. However, Hickman soon clawed back the time lost and for the remainder of the race, he and Iddon circulated in close formation but despite his best efforts, he was unable to find a way by and had to settle for another fifth place.

The result sees him move up to seventh overall in the standings and close to within one point of Andrew Irwin who currently holds onto sixth place and the final Showdown position.

Peter Hickman: “I’m happy enough with how the weekend has gone especially from where we were at the beginning when we were having a few issues. It took us a long time to get to the bottom of everything and the boys were up all of Saturday night changing to a third engine, but it ultimately paid dividends as that was what allowed us to be where we were on race day. It was difficult coming from so far back on the grid in race one, but I put in a few overtaking manoeuvres and a couple of riders dropped out so fifth was a good result especially as it put me in a better position for race two. There, I got away well and just sat behind Christian but whilst I was stronger in some areas, he was stronger than me in others. I was in two minds what to do in terms of trying a pass, but I didn’t want to risk a crash and losing any points so settled for fifth.

We’ve had a good haul of points this weekend and have gained a lot of ground on our rivals and are now just one point off the Showdown so with three races at the next round, we’ll be looking to clinch that top six place.” Darren Jones, Team Co-ordinator: “It’s been a tough weekend, one of the toughest we’ve had in a while so to end it with two fifth places is really pleasing. It took us a while to get to the bottom of a few niggling issues, so we’ve ultimately made the best of a bad situation. Of course, it would have been nice to have finished on the podium, especially for Pete at his local circuit, but we’re now only one point off a Showdown place and are in a good place for the triple header at Oulton where we’ll look to clinch one of those remaining spots.”