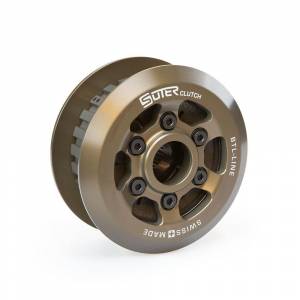 • First choice for more than 20 years in WSBK, MotoGP & MXGP championships
• The BTL (Back Torque Limiter) slipper clutch has been designed and developed to allow traction to be adjusted to accommodate different riding conditions. The Suter Clutch reduces the threat of over-revving the engine and maximizes the suspension performance.
• Quick off the start line due to a better clutch control
• Smoother braking phase over big bumps
• Less power required to operate the clutch
• Proven faster lap times
• More precise corner entry
• Higher corner speed
• Adjusted in conjunction with chassis and suspension set up the slipper clutch encourages smooth deceleration into corners and controlled acceleration out of corners.
• Anti hopping (basic principle): Prevents locking of the rear wheel during the coupling process and thus the loss of traction
• Produces a significantly softened braking phase before corners
• The Anti-hopping effect can be adjusted for every riding style; for tuned models, there is a range of harder main springs available to order. Included with delivery are all the relevant parts for installation, plus two additional Anti-hopping springs.
• The SuterClutch is highly impressive through its excellent responsiveness, the efficient inner lubrication, and its easy installation. The unique color of this clutch results from the hard-anodized Teflon coating, which considerably minimizes the wear on the friction surfaces.
• Fully adjustable to personal riding style
• There are two editions for the SuterClutch available: The MX-Line and the BTL-Line. Unlike the BTL-Line, the MX clutch comes without the anti-hopping mechanism.
• Through its ingenious design, you can fit it without any special installation tools. The pressure plate is installed using 6 bolts, allowing easy access for maintenance.
• Quick to install without special tools

The BTL (Back Torque Limiter) SuterClutch was specifically developed to improve lap times while reducing the physical effort required by the rider. It can be simply and easily adjusted to different conditions and rider styles. It reduces the strain on all components including the gearbox, prevents over-revving of the engine and maximizes the suspension performance.

The SuterClutch precisely controls all aspects of engine braking, massively improving the stability of the bike. This results in stable late braking, precise corner entry and optimal corner exit speed.

With over 400 Grand Prix victories and countless World Championship titles, the SuterClutch is becoming essential, to compete at the highest level. Increasingly, the factory teams are relying on Suter clutches! Tested and proven in the toughest of all competitions.

Function Principle of the BTL-SuterClutch: 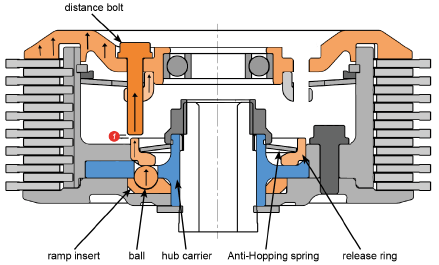 The behavior of the clutch can be changed by three parameters:
• Force of the limiter spring (Anti-Hopping spring)
• #1 Gap between bolts and release ring
• Ramp angle
The engine brake torque causes the hub carrier (blue) to rotate relative to the inner basket and thus the balls are being forced up the ramps. These balls push against the release ring resulting in an axial lift.
The torque limiter spring works against this axial lift and hence determines at which braking torque the clutch disengages.
When the release ring passes a predefined gap it presses directly onto the bolts which results in disengaging of the clutch.
I already have an anti-hopping clutch ex-factory, what is the advantage of a SuterClutch compared to it?
An OEM Clutch usually functions according to the ON/OFF principle (no intermediate states between open and closed possible). The SuterClutch has a much smoother and more precise response:
What justifies the price difference between SuterClutch and competing products?
Just by looking at the construction you can see that the SuterClutch consists of much more and more com-plex parts, as a standard clutch. Besides, we use only high-quality materials refined to ensure the highest possible stability and longevity (e.g. Teflon-containing special coating to minimise abrasion). 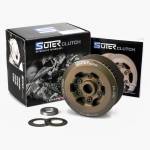 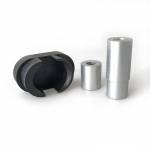 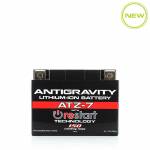 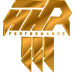 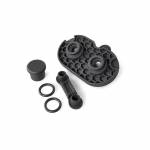